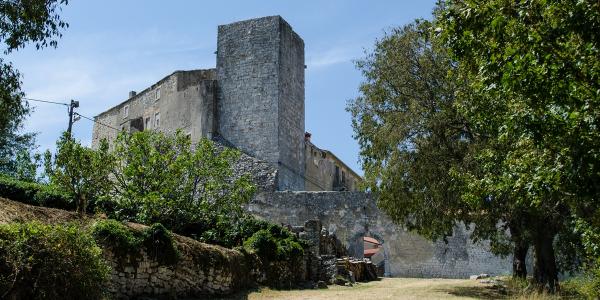 Recommend it to your friends through these services..

The old town of Kršan is a fortified town and one of the best-preserved Istrian castles, which was first mentioned in the 13th century. It is located on a hill surrounded by defensive walls. You enter the town through the well-preserved town gate, and a small courtyard is surrounded by the remains of residential and commercial buildings. On the right side, the old municipal house is the first to lean against the defensive wall. In front of it is a castle that is partly built on a steep stone rock, and its defence structure has a trapezoidal plan, being made up of a high tower that dominates the entire settlement. The frame of the 15th century Gothic portal and the mouth of the well with the engraved year of construction, 1666, have been preserved in the small inner courtyard. The two-naved 17th century parish church of St. Anthony the Abbot, which was renovated in the 18th century in the Baroque style with a preserved stone altar and marble inlays, a marble baptismal font, a sink and a silver chalice rises up opposite the castle, and within the defensive walls. On the floor is a tombstone from the 17th century. In 1803, a 22-metre-high free-standing belfry was erected, and at the beginning of the last century, the church also acquired an organ.

Outside, in the cemetery, is St. James’s chapel dating back to the 15th century, which was built up in 1814 and on the floor of which the tombstones of 15th, 16th and 17th century feudal lords can be found. A plaque from 1415 by Julije Kršanski stands out, where a Latin epitaph is written in Gothic letters.